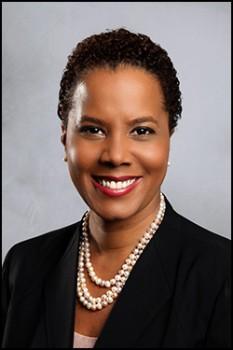 Leecia Eve is vice president – State Government Affairs for the NJ, NY & CT region for Verizon. She is responsible for the company’s corporate interests – including public policy, government and external affairs, regulatory matters, and philanthropy – in New Jersey, New York and Connecticut.

Before joining Verizon in July 2013, Leecia Eve served as the Deputy Secretary for Economic Development for New York, and, as such, was the chief economic development advisor to New York Governor Andrew M. Cuomo. As Deputy Secretary, Ms. Eve focused on leveraging State resources to attract new investment in strategic industries and critical infrastructure through public-private partnerships, bring new businesses to New York and help New York’s businesses strengthen and expand, while marketing the Empire State as a state that is once again Open for Business. She previously served in the Cuomo Administration as Executive Vice President and General Counsel of Empire State Development, the primary economic development agency of the State of New York.

Among her prior roles, Ms. Eve served as Senate Counsel and Homeland Security Advisor to then-Senator Hillary Rodham Clinton and as Counsel to then-Senator Joseph R. Biden Jr., when he served as the ranking member of the United States Senate Judiciary Committee. She also served as Vice President for Policy of the No Limits Foundation, a not-for-profit organization based in Washington, DC that promoted economic issues at home and abroad and advocated for transforming American foreign policy around the world, including advancing the rights of women.

Ms. Eve began her legal career as Law Clerk to New York State Court of Appeals Judge Fritz W. Alexander II. She has practiced at the law firm of Covington & Burling in Washington, DC and was elected partner of the law firm of Hodgson Russ in Buffalo, New York. She is a graduate of Smith College (AB), the John F. Kennedy School of Government at Harvard University (MPA) and the Harvard Law School (JD).