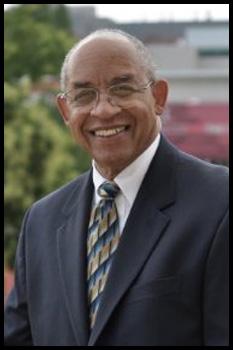 Laurence Anthony (Tony) Howell was born is Fort Wayne, Indiana. He began college at the University of Dayton in 1962 but after one year, entered the U.S. Army where he remained for seven years. After being mustered out in 1970, Tony continued his college career at Indiana State University and received bachelor degrees in Sociology and Psychology (1973) and masters degrees in Counseling and Administration (1984).

While at ISU, Tony was a founding member of the Black Student Union and co-chairman of the first national conference of Third World Students (precursor to the current American Student Union). Following his baccalaureate, Tony became the second black in the history of ISU to be a residence hall director and area coordinator. When the director of the Upward Bound Program resigned, Tony was named to direct the 60 student, $72 thousand dollar activity that he expanded into a program that served over 100 students at $365,000 annually. During his ten-year tenure, Tony developed three other complementary programs (federally-funded Talent Search and Student Support Services and the privately and institutionally-funded Educational Opportunity Program-EOP) together with Upward Bound that served over 3,500 students annually with a $2.0 million dollar budget.

Tony has served in the federal government as the EOP/TRiO liaison on the staff of the senior senator from Indiana (Birch Bayh) and the then congressman (later senator) from Illinois (Paul Simon) from 1978 through 1984. He also served as staff to the Joint Committee on Education and senate office liaison to the then Office of Education (Higher Education Branch) of the Department of Health, Education and Welfare (currently called the Department of Education).

From 1993 to 1997, Tony was an active member (and five year board member) of the Council of Educational Associations (COE) and three time president of the regional TRIO organization, the Association for Equality and Excellence in Education (AEEE). He has been a special consultant to many universities (over 20) and student services/Federal TRiO programs throughout the nation and a recipient of numerous professional TRiO, student services and community awards.

In 1989, Tony came to the New Jersey Department of Higher Education; he was the Program Officer for Pre-College Programs, the first departmental Affirmative Action Officer and the Affirmative Action Officer for all state higher education institutions and the Executive Assistant to the Chancellor for Constituent Relations and Public Information, the primary contact person to the department for all campus student government associations in the state.

Since 1993, Tony has represented NJIT in various capacities in many organizations, such as:

In 2003, Tony became the regional chair (Region A) of the National Association of Multicultural Engineering Programs Advocates (NAMEPA) and a member of the national board until 2008.

Currently, Tony serves as the Executive Director of Educational Opportunity Programs (EOP) at NJIT, where he has responsibility for EOP, the (TRiO) federally-funded Student Support Services Program, Gear-Up, ESL Upward Bound programs and the state-funded Consortium for Pre-College Education in Greater Newark, program, who together serve over 2500 pre-college through postbaccalaureate students with budgets totally over $6.7 million.

Tony is husband of Dr. Rose Mary Howell and father of grown children, Marc and Crystall.

Tony’s military career began in 1963, when after an “unsuccessful” freshman year at the University of Dayton; he enlisted in the U. S. Army, with basic training at Fort Knox, Kentucky training as a tanker. But when deployed to Germany, Tony transferred over to infantry, qualified for airborne, became a member of the 8th Airborne, attached to the 13th Armored Calvary, Bad Hersfeld. Later, Tony applied and was successfully qualified for the 10th Special Forces Group (Airborne) located in Bad Tolz, Germany in 1965. After numerous and many missions all over Europe, North Africa and the Middle East, Tony was transferred to the 5th SF Group in Southeast Asia in 1967 and located in the Vietnam Theater until the end of his military career in 1970.